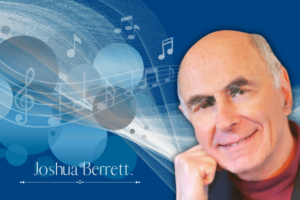 What is it about music that has such power to heal, inspire, and connect us with
the beyond? How is it that musical moments can move us to tears, calm our spirit, or spur us to
action?” – Joshua Berrett

The sense of hearing is the first of our five senses to develop. Within the second trimester of pregnancy, the human fetus begins to develop a rudimentary ear. In other words, what we hear is imprinted in utero and provides a vitally important basis not only for receptivity to music but also for language acquisition, spatial recognition, and physical balance as well.

We speak of “my music” and use phrases such as “they’re singing my song.” Musical memories define so much of who we are and the many stations we pass through on life’s journey.

My teaching career spans well over forty years in higher education. In addition, I have given seminars and keynote addresses at institutions in the United States such as Rutgers University’s Institute of Jazz Studies, The City University of New
York, New York University, Johns Hopkins University, and Georgia State University.

I have also lectured abroad in South Africa, Israel, and Italy.

Since retiring in 2012, I have been highly active in the Lifetime Learners Institute at Norwalk Community College in Connecticut. My courses have proven to be highly popular. They have covered such topics as:

Teaching Music Appreciation Online
I have been teaching music appreciation online since the early 1990s and have come to embrace resources like Blackboard and gotomeeting.com as platforms for interactive and collaborative learning.

A Commitment to Engaging, Stimulating Courses
I like to make my courses stimulating and employ a variety of tools such as embedding sound files, playing YouTube clips, and embedded sound files, YouTube clips, juxtaposing examples of rap with the sources sampled and comparing pop and jazz versions of the classics with the originals. Above all, I strive, whenever possible, to reveal music’s relationship to the human condition.

A specialist in 19th and 20th-century music, I have published two volumes on the history of the symphony in the Garland Symphony Series of Barry S. Brook, entries in the International Dictionary of Opera, and articles in such major journals as the Journal of Jazz Studies, The Musical Quarterly, American Music, The Black Perspective in Music, The Journal of Southern History, and Musica Oggi.

My Research
My research is cited in major publications—among them:

More recently, I have written the commentary for the Verve Deluxe CD reissue of Satchmo: A Musical Autobiography and
liner notes for J.J. Johnson, Origins: The Savoy Sessions. I have also written liner notes for a number of RCA Victor Red Seal albums (now BMG Classics).

From time to time, I have reviewed book manuscripts for Houghton-Mifflin, Prentice-Hall/Pearson, Worth Publishers, The University of Michigan Press, and Yale UniversityPress, and have written liner notes for record companies. I continue to write Concert Notes for various music ensembles.

Other Activities
I continue to be active as a violinist and am a member of an intergenerational orchestra of accomplished amateurs and professionals in the St. Thomas Orchestra.  Our concerto soloists include past and present members of the New York Philharmonic.

I am the recipient of a number of grants, from such sources as the National Endowment for the Humanities and NYNEX for my research in jazz as well as for developing Internet-based Distance Learning courses in music.

I also participated in a National Science Foundation project for Mercy College faculty dealing with ethical issues and the Internet during the summer of 2002.

Want to ensure that the Ageless Mind Project thrives and is able to reach more and more people around the world? Please consider making a donation. Any and all help is greatly appreciated! Just click on the “Donate” button below.